Twitter Facebook RSS Feed
← A Song that is a Barometer and a River Like no Other – Neeraduvan Nilayil
What Will Your Verse Be? My Tribute to Robin Williams →

2 States and an Appeal to Bollywood

The next time your big airy head comes up with the idea of a South Indian character, please make sure that he or she says AT LEAST SOME of the words right. 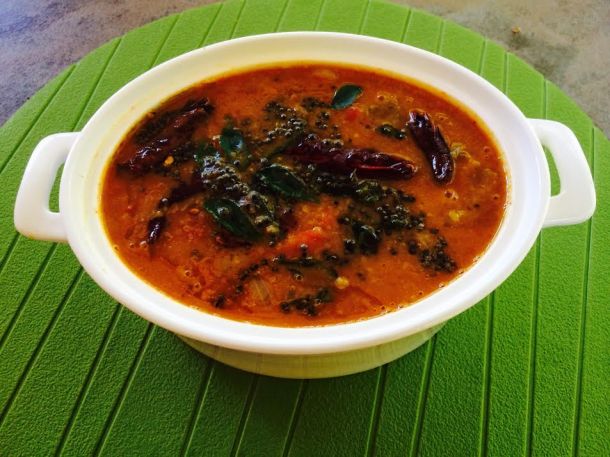 Sambar courtesy Mohini Sharma. Thank you Mohini, the sambar tastes as delicious as it looks.

After that abomination called Meenalochani who derailed a certain Chennai Express, it’s the turn of Ananya Swaminathan to spout mispronounced ‘Madrasi’. A few minutes into 2 States, I was put off by the mispronunciation by this TamBrahm no less. I don’t think any maami worth her madisaar would be caught dead saying saambar. (That’s a kind of deer, if you didn’t know. Look it up here). That rich, fragrant, hot, spicy concoction in which idlis drown themselves to attain Nirvana? That’s called Saambaar. Nothing to do with deer except for the fact that both are vegetarian.

Getting your characters to say the words the right way is the least you could do after all that idiotic stereotyping you have been passing off as comedy since the days of Mehboob and his dark skin and large heart. You got it right about the large heart though.

That’s why we laugh at ourselves and fork out hard earned money to sit through such insufferable absurdities. Oh well, maybe we are actually laughing at you. About how you got it so wrong and haven’t a clue yet.

Please allow me to give you a tip here. Watch Dasavatharam – that Kamal Haasan times 10 starrer.  (Never thought the day would would come when I actually recommend that movie to someone!) Pay close attention to the character named Vincent Poovaragan. You can ignore the rest of the movie. He is a character from my part of the country, (the southern coast of Tamil Nadu) and back there, they speak a very distinct dialect of Tamil. And he nailed it just right! Know why? He did his research and got himself coached by someone from that part of the country. Now that is what is called professionalism. Look it up. It is spelt with a capital P.

The only reason I agreed to watch 2 States was because someone told me it was nothing like the book. And this is probably the first time I looked forward to watching a movie BECAUSE it was nothing like the book. I am usually cribbing about how a movie leaves out delicious bits of the book and how it usually is a pale imitation of the book. I hoped this was something like the metamorphosis of Five Point Someone into 3 Idiots. That sounded promising and on the wing of that promise, I sat down to watch 2 States.

I was disappointed on that count. It follows the book faithfully. But then, I never had any issue with the story, so that was okay. My only issue had been with Chetan Bhagath’s writing style and so on the plus side, I did not have to put up with that in the movie. I am sorry, but allow me to indulge my mean streak here today. I find Chetan Bhagath to be an over hyped, under performing author, despite his being portrayed as a brilliant writer and the savior who got young Indians hooked on reading. I hold him personally responsible for bringing down the reading standards of a whole nation.

But Bollywood, I’ll give you credit for one thing. You actually did a good job with the casting of all the characters and they all did a good job, especially the moms and dads. The moms were a riot! Please have Manish Malhotra dress more of your female characters. But please have him study an actual TamBrahm bride if he plans to play fairy godparent to another one in future. That is, if authenticity is what you are looking for. But I guess, authenticity and Bollywood should not be mentioned in the same sentence. 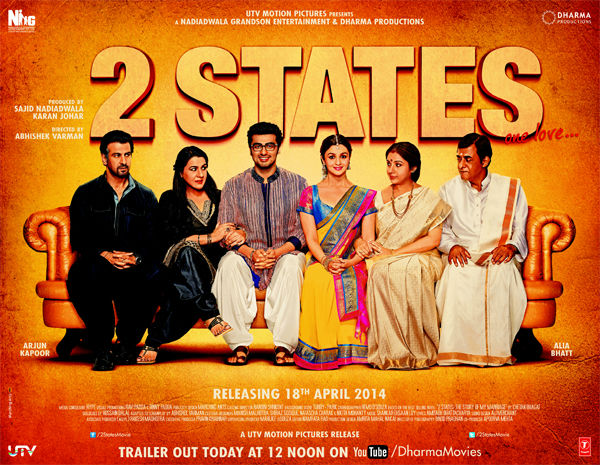 Otherwise, you did a good job, except for the saambaar that is. But I guess we’ll forgive you again and join you in a Kanjeevaram clad high velocity Bhangra to celebrate the invincible spirit that is India! (No lungis please)

And no, I wasn’t planning to do a movie review. So I’ll not go there.

Posted in Of This & That, Seriously on the Lighter Side, Tamil Films, The Things I Read and tagged 2 states, Aalia Bhatt, Arjun Kapoor, Chethan Bhagat, dasavatharam, hindi cinema, Kamal Haasan. Bookmark the permalink.
← A Song that is a Barometer and a River Like no Other – Neeraduvan Nilayil
What Will Your Verse Be? My Tribute to Robin Williams →